Advancements in technology continue to drive computer technology into places previously thought impossible. Functions that we once thought were only possible from a desk inside an office are now taking place on battlefields, farm fields, and thousands of feet off the ground in airplanes.

What kinds of things are making it possible for Boeing to computerize so many functions? How does Kontron navigate tanks electronically? How do our hospitals, universities, and television networks do so many things from such exotic places?

It has been a long process, but there are several areas where advancements had to be made for these far-fetched dreams to become reality. Without success at each step, we would have never achieved the things that we now take for granted.

One of the most important things that employers want is for workers to be able to remain in contact with their central point from anywhere they may be working. Tied directly to that is the use of the cloud to handle files. This permits workers to access emails, documents, and other data from a phone or laptop where the files don’t actually reside.

With a reliable data or wifi connection, distant equipment can provide information and receive instructions in a rapid, carefully-tailored way. Weather computers can monitor conditions and provide instant updates that help drive forecasts and warnings. Military equipment can detect vehicle locations and enemy resources. Airplanes can provide feedback about wind shear and turbulence. All of these processes are enhanced by the ability of equipment to gather, transmit, and retrieve data from a central point rapidly and accurately.

Bulk is the enemy of technology in so many situations. Your smartphone would never have come to the market if processing took as much space as it did in the days of Univac. Getting hard drives, processors, and entry tools (such as keyboards and touch-screens) small enough and light enough to satisfy the product’s needs is an incredible challenge to overcome.

Microprocessors spurred the charge back in the 1970’s, and from there the technology treadmill has only been satisfied with ever-smaller, ever-lighter components.

And as long as there is some movement toward those goals, there will be a further clamoring for applications that demand even more downsizing. The idea of a mobile telephone was far-fetched enough when it was envisioned for mounting in a vehicle, but once that was reality, the next step was to become portable. Next was a smaller phone, then one that had a screen, took pictures, and surfed the internet. The technology has developed to make each aspiration come to pass, and there is no end in sight. 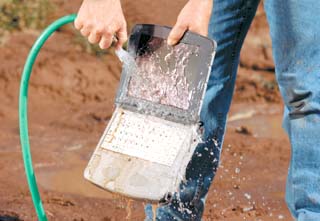 A quick bit of computer trivia: The reason we refer to a functionality problem as a “bug” is because an actual bug–a moth, specifically–got tangled up in the Mark II computer at Harvard in 1946, causing a malfunction.

Today’s computers are expected to tolerate far more than some entomological interference. We expect them to function normally at a wide range of temperatures, humidity levels, and altitudes. We want them to remain functional in sand, dust, and rain.

And they do. New cell phones can survive submersion in water. Computers are being built to withstand impacts from combat and air travel. Everything is keeping pace with our demands for durability in the most extreme conditions, and without this growing toughness, many functions would be impossible.

It takes more than just the units themselves, of course. Batteries need ever-longer life and ever-shorter charging. Screens and monitors must be brighter and sharper.

The heart of the demand for computerization is the need to do things faster and more accurately than a human can do it. That includes computation, communication, and much more. With the growing power of technology to go to places it never could before, those growing demands are being met.

Both the online and offline presence of a company is very crucial in promoting the brand name. Whether the company is small … END_OF_DOCUMENT_TOKEN_TO_BE_REPLACED

WordPress is a popular platform builder for many websites on the Internet. It holds almost a-third of the websites online, … END_OF_DOCUMENT_TOKEN_TO_BE_REPLACED

From social media to paid advertising and everything in between, a great deal of your marketing efforts is invested into … END_OF_DOCUMENT_TOKEN_TO_BE_REPLACED